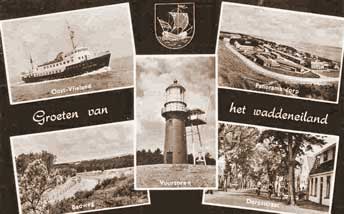 Vlieland as it exists nowadays is thought to be man-made. The island belonged to William II, who gave this ‘Insula Fle’ to monastery Ludinga in Achlum in 1230. The monks of the monastery used to reach the eastern part of the island by boat, and they sailed there via the stream Flevostroom (also called Vlie, from which the name Vlieland is derived). However, the monks were more interested in the western part of the island, because there the area of Moerwaard was located, which was a cultivated peat moor. So the monks decided to start digging a canal named Monnikensloot (Monks’ Ditch), which connected Flevostroom and Moerwaard. However, an enormous flooding of the Moerwaard was caused due to this canal. This happened in 1296, when a storm scourged the area. This was also the storm that caused that the town of Harlingen came to be a seaside town. Two islands came into being then, Vlieland and Eierland. They were officially regarded as separated islands in 1314. 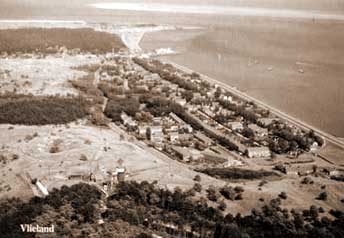 Vlieland used to be located more to the north than it is nowadays. Especially the outer edge on the eastern side did not fit in with the other Wadden islands. However, this shape was in line with the various currents in the sea. The direction of the currents changed in the seventeenth century, so the balance was upset. It took just twenty years for the sea to wash away the dunes on the western side of the island and then West-Vlieland came to be extremely near to the coast. This is why the inhabitants of the village moved out, because they knew what would be inevitable: eventually the entire village was engulfed. 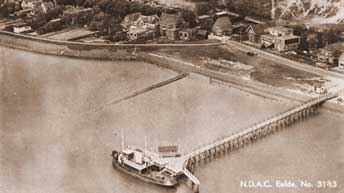 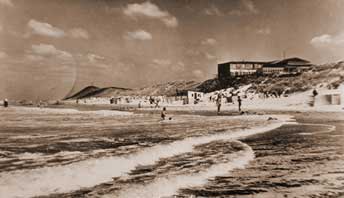 In terms of trade, the economic centre of the island used to be in West-Vlieland. The peat bogs had been cultivated, so much agriculture and fishing was done here. When Eierlandse Gat was formed later on, people concentrated more on the merchant navy and on whaling. Oost-Vlieland was connected to the water Vlie and it was increasingly considered an excellent location for trade. Oost-Vlieland was out of the wind, so trading sailing ships found a safe harbour here and could wait for a favourable wind. In the seventeenth century, this part of the island flourished enormously. To the Netherlands, Vlieland was an important gateway for the Hanseatic League (a trading association between ports located near the Baltic Sea) and later also for the colonies in Asia and America. At that time, West-Vlieland disappeared into the waves. Unfortunately for Oost-Vlieland, the Vlie changed its position to near Terschelling and Vlieland was left with mere sandbanks. This marked the end of the importance of the Vlie to Vlieland in terms of shipping. In line with the eternal struggle with the sea, a Wadden dike was constructed near Vlieland in 1825. The dike proved to be too low, because the water swept over it and flooded Oost-Vlieland. Still, not until the end of the nineteenth century did people construct new dams of 200-300 metres in length. The dams were made of brushwood, poles, debris, and basalt, which had to be brought to the harbour with sailing ships; this in itself was quite a job. From the harbour carts drawn by horses took the load with them across the mud flats and through the dunes to the coast. The construction of the dams was completed by hand and only during low tides. This marked the beginning of the struggle against the strong outgoing tide that washed away much of the coastline. In 1921, the province of North Holland considered evacuating the island of Vlieland, due to the relatively high cost of coastal protection compared to the low number of islanders. The Dutch Department of Waterways and Public Works fought this idea, as people were needed to continue the work in the island. In order to save Vlieland, the Department decided to pay for part of the budget deficit of the local council of Vlieland.